Pancakes seem to always win the favourite breakfast vote in my kitchen. The recipe sharing groups that I’m part of, have recently posted varying versions of making large sheet pancakes that are great for sharing. Baking the pancake batter in a flat pan saves time and effort required for traditional pancakes, making sure everyone gets to eat at the same time.

This Apple Cinnamon Pancake in a pan is my version using a healthier base – Wholemeal self raising flour, no oil and full of apple and cinnamon goodness. This recipe is,

In a large bowl, whisk the oat milk and vinegar together, set aside.

Heat up the oven to 180 degrees C on the fan forced setting.

Add in the water, Xylitol and cinnamon to the large mixing bowl and whisk until smooth.

Fold the Wholemeal self raising flour into the above liquid mixture.

Mix in the diced apple pieces.

Pour into the prepared flat pan and bake in a hot oven for 20 to 25 minutes at 180 degrees Celsius.

Bake until a skewer inserted comes out clean and the surface looks dry.

Sprinkle more Xylitol and cinnamon mixed with a tablespoon of water on top if desired.

Cool for about 5 to minutes and cut into large squares. 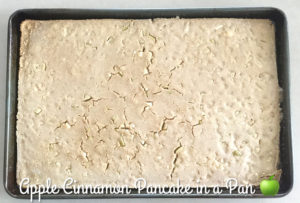 If you enjoyed my Apple Cinnamon Pancake in a pan recipe, then please try my other pancake recipe here😊

4 replies to “Apple Cinnamon Pancake in a Pan”